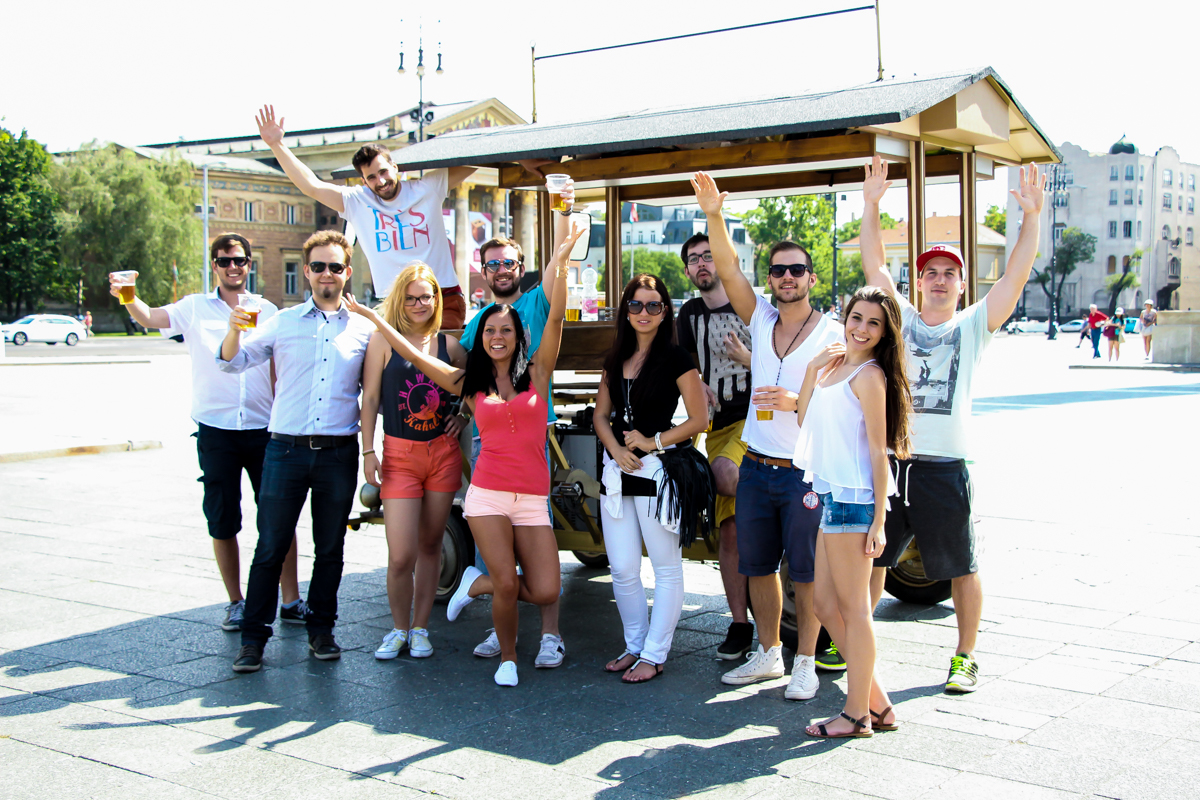 Why Party with Beer Bike Budapest

Older content.
The beer bike's route has been limited by the government. Please inquire about the new route in email.

Budapest is a beautiful, vibrant city that blends old and new with a flare rarely seen in other European cities. With over 50% of the population under the age of 54, the potential for unique experiences are popping up all the time. So why sit at a cafe and drink your beer when you can drink and bike with friends? And, with the Beer Bike Company, you just might have the chance to become a tourist attraction yourself!

The beer bike Budapest experience is first and foremost a lot of fun! You became part of the tourist attractions of this amazing city as you board the beer bike, so be ready. The “beer bikes” can hold from 4 to 16 people. They can even accommodate groups up to 100 people on multiple bikes. Bring your personalized party music, plug in, start pedaling and you have an instant party, complete with 60 mugs of beer. Beer not your style? There are other beverages to choose from. And don’t worry, the beer bike Budapest experience comes with a designated driver. You just provide the power.

Not only do you get to drink beer, but you get to see some pretty cool attractions. Your 2-hour tour begins at Hero’s Square in downtown Budapest. Hero’s Square is home to the Millennium Memorial celebrating 1000 years of Hungarian history. You will also see Andrássy Avenue, one of the main shopping and entertainment streets in Budapest. Also on the tour route is Vajdahunyad Castle. Built as part of Hungary’s Millennial Exhibition, it also houses a statue of the actor, Béla Lugosi, best known for his portrayal of Count Dracula in 1931 and a Hungarian-American.

Beer Bike Budapest has got you covered on this! While drinking in the city park is not a bright idea, if you manage to hop on a Beer Bike tour, you are good to go! With a keg of cold beer available for you at any time, beer biking is the way to go when it comes to enjoying a cold on - while pedaling too! After all, beer bikes are biking, so this does count as exercise!

Beer bike Budapest is easy to book. They can be found on the web at www.pedalbar.hu and send them a message. Or give them a call at +36 30 185 6996. The look forward to enjoying a good beer, great friends and a tour of Budapest you’ll never forget!

Beer Bike Budapest might not be the best historic service in town, but we sure as hell know how to throw a party!